Here Are The Excellent Free PlayStation Plus Games For June 2020

Sony has announced two huge free games for PS Plus subscribers in June.
Well, it turns out the leaks were partly right and partly wrong.
I wrote about two games that had been leaked as possible PS Plus games for the month of June: Marvel’s Spider-Man (which seemed very unlikely) and Star Wars: Battlefront II (which seemed more likely).
Turns out, the second leak was correct. Star Wars: Battlefront II joins Call Of Duty: WWII as the two free games for PS+ subscribers this June.
That’s quite a haul—two major, AAA shooters. One historical, the other space opera. Both quite different in terms of gameplay, map size and so forth, but also both first-person competitive shooters.
It’s almost like something got mixed up at Sony over the past two months. May’s two games were both sims—a city-building sim and a farming sim, which you can see here—now June’s games are both FPS’s.
That’s . . . odd, to say the least. Normally we’d get one shooter and one sim or something along those lines.
Whatever the case, I can’t recommend Call Of Duty: WWII highly enough. The new War Mode alone is worth the price of admission (or, since it’s free, the download file and your precious time).
This game was already announced and released on PS Plus a few days ago, making it a sort of May/June hybrid. I assumed Sony would release two more games but I guess it’s just these two.
I’m less enthusiastic about Star Wars: Battlefront II but that may be partly because of the game’s disastrous launch. I should play it again now that some time has passed and EA and DICE have fixed some of its more glaring issues. It’s certainly a gorgeously designed game and fun if you’re into Star Wars.
War Mode
Call Of Duty: WWII released in 2017. Developed by Sledgehammer Games, this is one of my favorite entries in the franchise this console generation. Only 2019’s Call Of Duty: Modern Warfare is better, as far as I’m concerned. Even Modern Warfare is missing one of the best modes that made WWII so great.
That’s War Mode, and it’s simply terrific. Unlike normal Call Of Duty multiplayer, War Mode maps are set up in multiple stages. Each “Operation” involves an offensive and defensive side.

For instance, in Operation Breakout, one side has to capture a base (by standing in a building with no enemies present); then proceed to build a bridge for a tank to cross a wide ditch (by interacting with a two-stage bridge while under heavy fire); then destroy an ammo depot (by planting a bomb and then guarding it until it explodes); then guide a tank to the enemy’s anti-aircraft guns (similar to guiding a Payload in Overwatch).
The opposing team tries to stop them, and this can be achieved at any of the four points in the Operation. If you prevent the opposing team from building before the timer runs out at the bridge, for instance, the match is over. The timer resets at each stage.
Other Operations have completely different objectives. In Operation Neptune, the attacking team has to storm the beaches at Normandy, while the defenders fire down from bunkers perched above the beach. Then the attackers must destroy all the radio equipment at another bunker further inland. Following that, the attackers have to plant and detonate three bombs each on two enemy cannons, while the defenders do their best to stop them and diffuse any bombs.
It’s an absolutely terrific game mode and some of the most fun I’ve ever had with any Call Of Duty game.
The game also has a strong historical campaign that takes place beginning with the storming of the beaches of Normandy that follows a squad of American soldiers as the push across Europe. It’s a story we’ve all heard before, but it has a really fascinating twist and a surprising ending that’s really stuck with me.
Traditional multiplayer is also very good, with plenty of maps and modes—like Domination and Team Death
I’m looking forward to picking this game back up after so long, as everyone I talk to says it’s improved massively since launch.
While the game does have a campaign—unlike the previous Battlefront—it’s nothing to write home about. The real meat of this game is in its multiplayer modes.
Multiplayer modes include:

Blast — Basically deathmatch.
Extraction — Move cargo across a map past various checkpoints while the other team tries to stop you.
Ewok Hunt — Stormtroopers hunt down Ewoks at night on Endor. The other team is the Ewoks. When an Ewok kills a Stormtrooper, the player becomes an Ewok, gradually increasing that team’s size.
Strike — Team-based objective mode where two teams of 8 fight over an objective like planting a bomb or defusing it.
Supremacy — Non-linear battles where teams need to take down capital ships. This is the main mode in Battlefront II. Two large teams battle it out trying to fill the score meter which in turn signals a capital ship to extract the winning team. Once this happens the second phase begins, transforming the match from an outdoors battle to a close-quarters firefight. The invading team has to break into the ship and destroy it but has a limited number of lives.
Starfighter Assault — 12 vs 12 spaceship battles with AI bots thrown into the mix.
Galactic Assault — Large, team-oriented, objective-based maps. Teams of 20 with vehicles, reinforcements, heroes and so forth, with maps from all eras of Star Wars.
Hero Starfighters — You can unlock both Heroes and their starships in this game, but this mode lets you play all the Hero starships, such as the Millenium Falcon.
Hero Showdown — Two vs two combat between heroes like Yoda, Kylo Ren, Luke Skywalker, Darth Vader, Rey and Chewbacca.
Heroes vs Villains — 4 vs 4 hero battles. Each team has 35 lives and whichever team is left standing wins.
Co-op — 4-player teams fight AI bots, capturing segments of the map to win.
Instant Action — Large-scale offline battles against bots.

As you can see, there’s plenty in both these games to keep you occupied which is why this really is one of the most exciting PlayStation Plus months in a very long time.
Call of Duty: WWII is available now on PS Plus. Star Wars: Battlefront II will be available on June 2nd.
You can check out the free Xbox Game With Gold for June here. 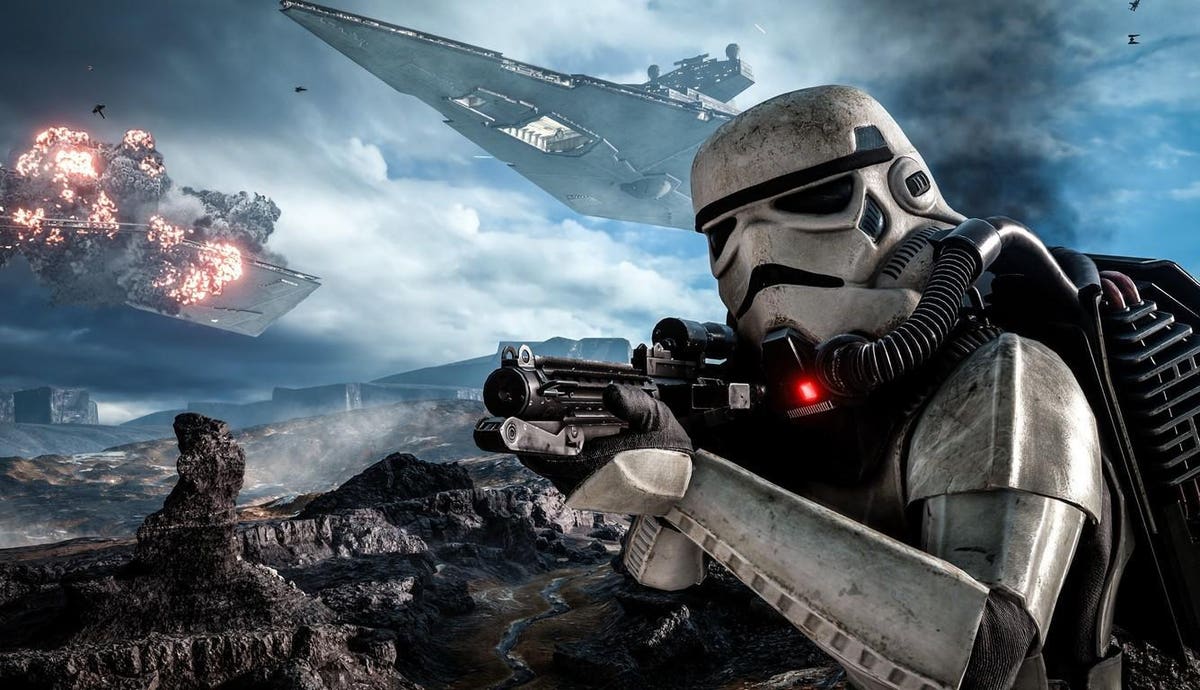 PlayStation 5 games event for June 4 is delayed: Everything you need to know